The Plague of Doves / Shamengwa Milk

Shamengwa is the younger brother of Mooshum and possibly the youngest son of Joseph Milk. It is noted time and again that Shamengwa grew old in style, dignified and strong. As a contrast to his brother Mooshum, who was a jolly trickster taken by storytelling, Shamengwa was a neat and silent man who was drawn to music.

Shamengwa was about four or five years old when his older brother Mooshum ran off with Junesse. This means he was probably born in 1892. He learns to play his fiddle which is his way of running off and finding freedom. One day, a cow breaks his arm when he is milking her. His arm is shattered and it hangs limp by his side, though he is still able to hold a fiddle with it.

His father takes his first fiddle away, but a dream tells him how to get a new one and he finds the old fiddle that belonged to Lafayette and Henri Peace. This was around 1908, when he was sixteen.

Years later, in the 1960s, Shamengwa spends most of his time hanging out with his brother Mooshum and bullying the new priest, Father Cassidy, who tries to get them to go to mass. At one point, Corwin Peace steals Shamengwa’s fiddle, but becomes his student after he returns it. Shamengwa dies three years later, in the early seventies. 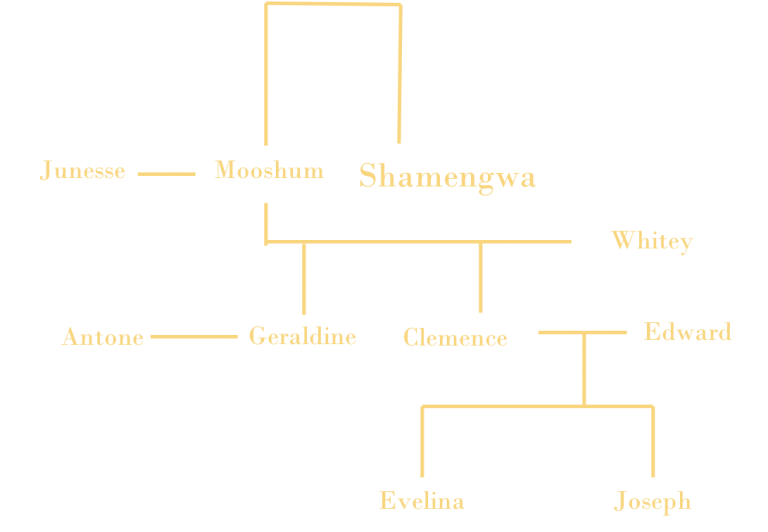