The Plague of Doves / The Round House / Antone Bazil Coutts

Antone Bazil Coutts is a mixed-blood judge who plays an important role in both  The Plague of Doves and The Round House. Because of his profession of judge, he has an unique insight into the lives of people both from the reservation and its neighbouring towns.

As a boy, Antone divided his time with his mother’s family on the reservation, and the big house in Pluto. The house was built by Antone’s father who, in turn, inherited the land from his father, Joseph Coutts. He suffered from a strange series of lumps on his head which were eventually miraculously cured by his doctor, Cordelia Lochren.

At age seventeen, Antone starts a love affair with his former doctor Cordelia who is much older than he is. Around the same time, he starts working at the Pluto cemetery. Three years later, his boss, Gottschalk, dies and Antone becomes the manager of the Town of Pluto Cemetery.

Five years later, Cordelia ends her love affair with Antone by telling him she is marrying the man who remodelled her home, Ted Bursap. Heartbroken, Antone starts his study of the law through correspondence courses and reads the journals of his grandfather, Joseph J, Coutts. A year later, Cordelia and Antone start their affair again.

Soon after, Antone has to bring his mother to a nursing home and is forced to sell his home—deciding to take the state bar exam. The house is sold to Ted Bursap who demolishes it. His affair with Cordelia finally ends and a few years later Antone moves to Washington to work as a lawyer.

In the mid-sixties he moves back to Pluto and falls in love with Geraldine whom he marries shortly after. Afterwards, he and Geraldine adopt Corwin Peace.

Antone Bazil Coutts is a tribal judge for the Little No Horse Indian Reservation. He and Geraldine married later in life and were surprised when Geraldine became pregnant of Joe in 1975.

After the attack on Geraldine, Bazil goes through his old cases to look for someone who might hold a grudge against his family. He comes across the case about Linden Lark and remembers how the Larks were bankrupted after the case in which Bazil acted as judge, but it is only later that Bazil realises that it was indeed Linden who raped Geraldine.

Bazil is often the voice of reason for Joe. Through his career, he is an authority on the legal history of American Indians and is the first to realise that they might be stuck in a legal deadlock, because they do not know whether Geraldine was assaulted on tribal land, fee land, white property, or state land—which would change the laws. 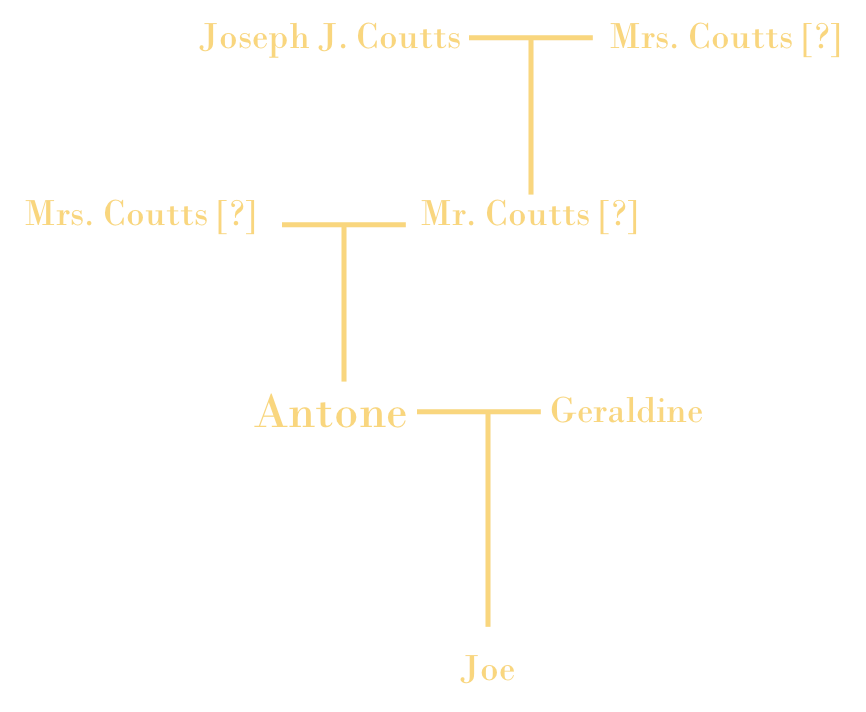