The Round House / The Plague of Doves / Seraph "Mooshum" Milk

Seraph “Mooshum” Milk was born in 1884, a year before the Battle of Batoche of 1885. Mooshum’s father had stood by Louis Riel, the military leader of the Métis people during the battle. After Riel’s surrender, Mooshum’s family moved down to North Dakota, near the town of Pluto.

Seraph Milk, who is almost exclusively referred to as Mooshum, is the father of Clemence, Geraldine, and (probably) Whitey, and the grandfather of Joe Coutts, Evelina, and Joseph Harp. Contrary to Mooshum’s claim that he would be turning 112 in the Summer of 1988, he would actually have been 104.

In 1911, when Mooshum was twenty-seven, he and his friend Cuthbert Peace, and Asiginak and Holy Track were hanged from an old oak tree. Mooshum is the only one who lives, because one of the leading members of the lynching party, Eugene Wildstrand, is the illegitimate father of Mooshum’s wife, Junesse.

Junesse and Mooshum met in 1896 when Mooshum was twelve and they lived with Mustache Maude and her husband in the Badlands for six years before returning to the Little No Horse Reservation in North Dakota.

Mooshum is the older brother of Shamengwa and unlike Shamengwa’s musicality, is drawn to storytelling. He mostly sits in his daughter’s home telling stories to his grandchildren. As he grew older, Mooshum became increasingly silly and wise at the same time. He has great knowledge of Ojibwe culture and has prophetic dreams in which he tells stories from the Ojibwe oral tradition that cast the assault on his daughter in a tribal narrative.

In the 1980s, Mooshum lives with his daughter Clemence in the pale green HUD house. Despite his age, he still works in the yard, but mostly sleeps on his cot by the window. 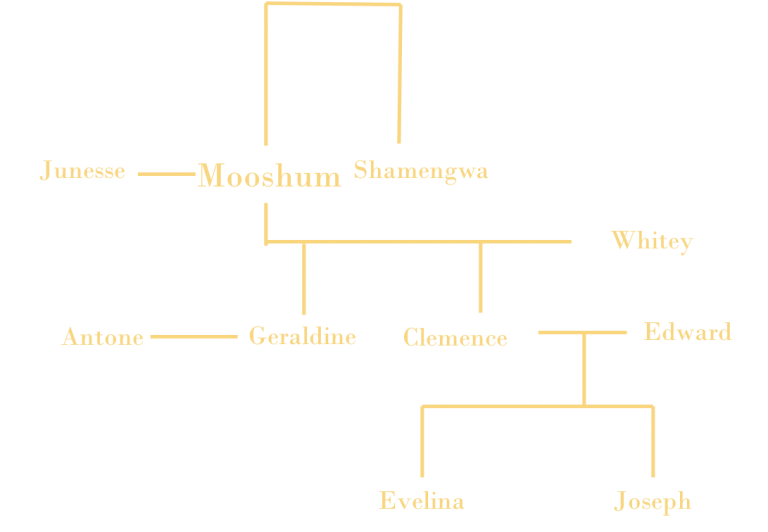